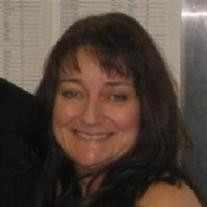 Tammy S.(Van Atta) Nusser, 47, of Lancaster, died peacefully Friday, December 21, 2012 at the Pickering House. She was born January 14, 1965 in Lancaster, the daughter of Robert J. and Donna J. (Bradley) Van Atta. Tammy was raised in Bremen and attended Bremen United Methodist Church prior to becoming a member of St. Peter’s Lutheran Church in Lancaster. Tammy was a 1983 graduate of Fairfield Union High School,and was a proud member of the Fairfield Union Marching Falcons' Falconettes. She graduated in 1987 from Ohio University with a bachelor’s degree in Business Marketing. Tammy held many jobs and positions over the years and approached each one of them with all of her energy and enthusiasm. Tammy was most proud of, and was a perfect fit, in her position as Director of Development for the Lancaster/Fairfield County Chamber of Commerce. She served on the Fairfield County Humane Society Board, the Friends of the Park Board, the Tour De Cause Board, and was a member of the Progressive Referral Group of Lancaster. Tammy is survived by her husband of 25 years, Brian M. Nusser, whom she married December 5, 1987; son, Justin T. Nusser; father, Robert J. Van Atta of Bremen; brother, Gregory L. Van Atta of Jacksonville, Florida; sister, Pamela J. Wells of Columbus; brother-in-law, Mark C. (Marcie Beil) Nusser of Lancaster; sister-in-law, Joanna (Barry) Young of Lancaster; nieces, Rachel (Justin) Van Atta – Noyes of Atlanta, Georgia, Mollie (Casey Immel-Brown) Wells of Columbus, Erinn (Terry) Vollmer of Lancaster; nephew, Todd Young of Lancaster; great-nephews, Troy and Luke Vollmer; great- niece, Cozette Noyes and baby great-niece, Ella Vollmer who is due to arrive soon. She was preceded in death by her mother, Donna J. Van Atta; her Father-in Law and Mother-in-Law, Russell Nusser and Eleanora E. Nusser Morrow and Brian's step-father, Thomas H. Morrow Sr.. A time to visit with family and friends will take place Thursday, December 27th from 2 – 4 and 6 – 8 PM at the MORGAN FUNERAL HOME, 124 FORT STREET, BREMEN. Funeral services will be held Friday at 10 AM with Rev. Marsha Ashbaugh, cousin of Tammy, officiating. Committal services will follow at Grandview Cemetery, Bremen. Contributions may be made in Tammy’s memory to FairHoPe Hospice, 282 Sells Road, Lancaster, Ohio, 43130, The Arthur G. James Cancer Hospital & Richard J. Solove Institute, 300 W. Tenth Avenue, Columbus, Ohio 43210, The Tammy Nusser Foundation, payable to their account at the Bremen Banking Center, 1971 W. Fair Ave., Lancaster, Ohio, or to any of the organizations that Tammy actively participated. The family would also like to say a special Thank You to the staff of The Pickering House & FairHope Hospice as well as Dr. Thomas J. Scharschmidt and his staff.

The family of Tammy S. (Van Atta) Nusser created this Life Tributes page to make it easy to share your memories.

Send flowers to the Nusser family.