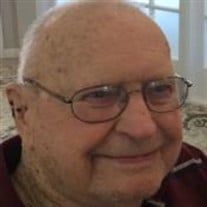 Robert D. (Bob) Winland, long-time resident of Bremen OH, passed away on December 5, 2017 at his current residence in Lebanon TN. He was 91 years old. He is survived by daughter Carol Douglas; son Robert (Robyn) Winland; granddaughters Briana (Chase) Froud and Mikayla Winland; and great-grandchildren Evan, Abigail, and Miles Froud, all of Lebanon TN. Bob’s wife of 70 years, Rita, passed away earlier this year. He was born October 30, 1926 in Monroe County, OH to Earl and Arabelle Winland. Bob’s brother Paul and sister Ruth precede him in death, while brothers Max, Dan, and Joe, and sister Rose Anne, survive. Bob and Rita also had a son David who died shortly after birth. Bob and Rita lived at 200 Bartlett Street for 65 years. It was common for Bob to be out on the porch swing, enjoying the weather and greeting people as they walked by. After discharge from the Air Force, Bob and Rita moved to Bremen where he was employed by Waverly Oil Works. After jobs at North American Aviation and Diamond Power Specialty Corporation, Bob worked for 25 years as a pumper for W. E. Shrider Company, a local oil producer. He was a shining light in the rough-and-tumble oil field, with his pleasant, even-tempered, positive, helpful, caring lifestyle showing through in all areas. Bob was a long-time member of the Church of Christ, being active in many good works. In accord with family wishes, there will be a private service at Grandview Cemetery in Bremen. Online condolences at www.morganfuneralhomeohio.com

The family of Robert D Winland created this Life Tributes page to make it easy to share your memories.

Send flowers to the Winland family.