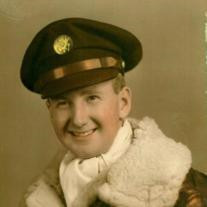 Marion R. Hanson went home to his Lord on March 19, 2011 while surrounded by family at the Pickering House in Lancaster, Ohio. He was born May 19, 1923 in Junction City to the late Virgil and Dessie Hanson. He was also preceded in death by brother, Walter; and sisters, Roberta and Ruth Mary Hanson. He graduated second in his class at Junction City Jackson High School in 1941 but chose to work in an aircraft facility in San Diego instead of attending college. He entered the Army Air Corp in 1943, where he served as a gunner on a B-17 Bomber of the 96th Bomb Group, 413th Bomb Squadron, 8th Air Force. On his 11th mission his plane was shot down by anti-aircraft flack and was listed MIA for two weeks before finding his way back to base in England. After being honorably discharged with the rank of Staff Sergeant in 1945, he returned to Ohio where he married his wife, Marcella Heyd who survives. They would have been married 65 years this October. Also surviving are sons, Stephen (Saundra) of Lancaster, David (Rose) of Logan, Paul of Junction City, Mark of Bremen, Randall (Michele) of Junction City, and Michael (Khristine) of Crooksville; 15 grandchildren; 31 great-grandchildren; 9 great-great grandchildren; and numerous nieces and nephews. Marion loved to serve the Lord and was an active member at Mt. Zion United Brethren Church in Junction City, where he taught Sunday School for over 50 years. He also was a former member of Gideons International. He retired from Tom Drumm Motors in New Lexington where he was the service manager for many years. He enjoyed his retirement years spending time with his beloved wife, children and grandchildren. A gathering of family and friends will take place Tuesday from 2-4 and 6-8 PM at the Morgan Funeral Home, 124 Fort Street, Bremen. Visitation will be held Wednesday from 10 – 11 AM. Funeral services will be held Wednesday at 11 AM at Mt. Zion United Brethren Church with Rev. Eric Self and Michele Hanson officiating. Interment and military honors will follow at Mt. Zion Cemetery. Contributions may be made in Marion’s memory to Mt. Zion Church or to Scioto Youth Camp.

Marion R. Hanson went home to his Lord on March 19, 2011 while surrounded by family at the Pickering House in Lancaster, Ohio. He was born May 19, 1923 in Junction City to the late Virgil and Dessie Hanson. He was also preceded in death by... View Obituary & Service Information

The family of Marion R. Hanson created this Life Tributes page to make it easy to share your memories.

Send flowers to the Hanson family.