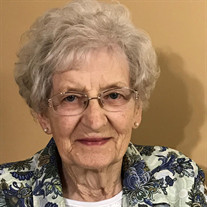 Marilynn Maxine (Weidner) Ardrey, of Rushville, passed away March 24, 2022 at the Pickering House surrounded by her loving family. She was born in Lancaster on Christmas Day, 1933, the daughter of Mabel Leona (Fisher) and Alva Edison Weidner. For most of her adult life, Marilynn worked side by side with her husband and children on their family beef cattle and dairy farm near Rushville. In early mornings she baked, then milked 36 cows twice a day, and spent the balance of many days driving a tractor to bale hay, or work elsewhere on the farm. Along with raising their family, and working on the farm, Marilynn worked in the community in several positions. Beginning at an early age, she worked at the Fairfield County Courthouse. Later, she worked with son Steve at Anchor Hocking, followed by many years of cooking and cashiering at Fairfield Union High School cafeteria. Amazingly, she found time to volunteer as member the Rushcreek Presbyterian Church, and member and officer of the Rushcreek Lions’ Club. She loved to team up with her close friend, Betty Love to prepare food for the Rushville Lions. She was a Lutheran prior to Presbyterian marriage to William Verne Ardrey. As much as she enjoyed her life as a wonderful wife, mother, grandmother, farmer, cook, and baker, she also enjoyed square dancing, roller and ice skating, and waterskiing. She cherished so many outings with her close friend Helen Barker. We nicknamed them “Thelma and Louise” as they jaunted to community events, beauty and Dr. appointments together in mom’s 2006 CRV. After retirement from the demands of farming, Mom and Dad enjoyed many years of traveling in their motor coach to many of the 50 states. They greatly cherished countless lasting friendships established on these journeys and through being members of The Foretravel Motorcoach Club. (Marilynn was once awarded a first place trophy in a competitive event maneuvering their motor home.) She is survived by her children; daughter, Christine (Mike Lewis) Collins, sons, Kim (Cecile) Ardrey and Steve (Trace) Ardrey; “adopted” son, Bob (Colleen) Freeman; 12 grandchildren, Jennifer, Brigette, Bryan, Brad, Brook, Justin, Michelle, Ashley, Erica, Ryan, Brenda and Lesly; 19 great-grandchildren, Drew, Dustin, Emma, J.D, Mason, Nevaeh, Kandice. Lyla, Haleigh, Jacob, Paisley, Brantley, Rylie, Meara, Jaci, Elaina, Kayliana, Elijah and Zoey; brother-in-law, Carl (Karen) Ardrey; sisters-in-law; Nancy and Carol Ardrey; along with cousins and many nieces and nephews. She was preceded in death by her husband of 56 years, William Verne Ardrey on Dec 11, 2008; parents, Mabel and Alva Weidner; step-father, Adam Julian; 2 grandchildren, Kayla and Jamie Ardrey; great-granddaughter, Olivia; brother, Jim Weidner and his wife Virginia, brothers and sisters-in-law, Lee (Patty) Ardrey, Rose (Walter) Stoner, Harold (Wilma) Hugus; and brothers-in-law, Don and Phil Ardrey. Visitation hours will be held at the Rushcreek Presbyterian Church on Sunday, March 27, from 2-5pm. A funeral service will be held Monday, March 28, at 2:30 pm at the Rushcreek Presbyterian Church, 7741 Main Street Rushville, Ohio with Pastor Nick England officiating. Graveside services will follow at West Rushville Cemetery. Online condolences at www.morganfuneralhomeohio.com

Marilynn Maxine (Weidner) Ardrey, of Rushville, passed away March 24, 2022 at the Pickering House surrounded by her loving family. She was born in Lancaster on Christmas Day, 1933, the daughter of Mabel Leona (Fisher) and Alva Edison Weidner.... View Obituary & Service Information

The family of Marilynn Maxine Ardrey created this Life Tributes page to make it easy to share your memories.

Send flowers to the Ardrey family.