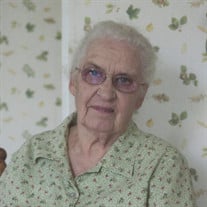 Marcella Jean Good Fisher, 94, went home to her Heavenly Father, dying peacefully the evening of June 7, surrounded by children and grandchildren. Marcella was born August 25, 1926 to Ellis and Kathryn (Stemen) Good, the oldest of five girls. In 1948, she married Freeman Dale Fisher, who died in 1980. Together they owned a farm and raised six children: Janet Sonifrank (David), Marilyn Fisher, Kathy Keim (Al), Robert Fisher (Bethany), Richard Fisher (Donna), and Ronald Fisher (Susannah). Along with her children, she is survived by 17 grandchildren, 34 great-grandchildren, and 2 great-great-grandchildren. One sister, Evelyn Good Brenneman, and three brothers-in-law, Carl Wesselhoeft, Donald Plank, and Paul Brenneman, survive. Her parents, her husband, three sisters (Leota Wesselhoeft, Doris Plank, and Wilma Yutzy), and one infant brother, Wayne Good, all preceded her in death. Marcella was a faithful servant of the Lord, always guiding her children through her example of grace and love. Busy with gardening and caring for her home, she often welcomed guests, family and friends and sometimes even international visitors. She regularly taught Sunday School and Summer Bible School classes. For many years, she was an active member of the Ladies' Sewing Center. As her children and grandchildren grew up and left to live and work nearby, or in different states and countries around the world, they all depended on her weekly letters and her prayers. She followed the progress of each one with interest, acceptance, and love. In later life, Marcella enjoyed traveling both within the country and to other countries, especially to Prince Edward Island in Canada. Her family remembers the times they spent together at the homeplace, where her presence was the heart of it all. Calling hours will be held on Friday, June 11, from 6-8 p.m. at Marcella's home church, Turkey Run Mennonite Church. Service will be on Saturday, June 12th, at 10 a.m. at Turkey Run. In lieu of flowers, those wishing to show support may make a donation to rosedaleinternational.org, a mission organization with which several of Marcella's grandchildren are involved.

The family of Marcella Jean Fisher created this Life Tributes page to make it easy to share your memories.

Send flowers to the Fisher family.