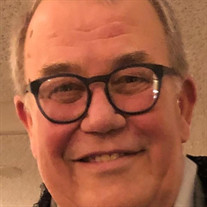 Jeffrey Alan Hubbard, 69, of Lancaster, died unexpectedly Saturday, October 10, 2020 in Lebanon, Ohio. He was born May 1, 1951 in Lancaster, Ohio the son of Dwight “Buzz” and Gertrude “Tudie” (Daum) Hubbard. He was a 1969 graduate of Fairfield Union High School and received his degree in Engineering from The Ohio State University. Jeff was retired from the City of Columbus, where he was the superintendent of the Division of Water and ended his career with the Division of Electric. Jeff is survived by his daughters, Thea (Daniel) Ramey, Sydney and Claire Hubbard; grandchildren, Ashton, Shawn (Ariah) and Jalyn; great-grandchildren, Raelynn and James; sister, Barbara (Ike) Kelley; brother-in-law, Craig (Sally) Wharton; girlfriend, Joyce Stacy; and many nieces and nephews. He was preceded in death by his parents; and his wife, Sherry Hubbard. A graveside service will be held Saturday, October 17th at 1 PM at Grandview Cemetery, Bremen, Ohio. Contributions may be made in Jeff’s memory to The Sherry Hubbard Technology Fund, 162 East Main Street, Lancaster, Ohio 43130 via check or visit www.fairfieldcountyfoundation.org. Online condolences at www.morganfuneralhomeohio.com

The family of Jeffrey Alan Hubbard created this Life Tributes page to make it easy to share your memories.

Send flowers to the Hubbard family.