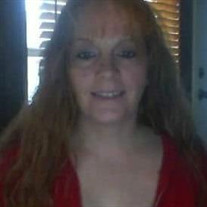 Helen (Chris) Christine Myers, of New Lexington, Ohio left this earth suddenly on May 8, 2016 at the very young age of 44 years. She was visiting her mother at Fairfield Medical Center in Lancaster, Ohio when she walked outside to get some air, and suddenly grabbed her head and said, “I just got the worst headache”..She was gone within a second, due to a brain bleed (aneurysm). Chris was life-flighted to OSU, where everything possible was done to bring her back to us. Unfortunately, it was not meant to be. The aneurysm ruptured at least three more times, and brain death had occurred. Chris drew her final breath at 6:40 PM on Sunday, May 9, 2016 (Mother’s Day). This is not surprising, as Chris would make damn sure to pick a day that no one would forget. The depth of her orneriness was unmeasured, making this very prominent day, one she would have chosen, with much glee. Chris was born to Bobby Sr. and Sharon Preece in Lancaster, Ohio on September 20, 1971. Her father preceded her in death in January, 2015. We are certain her hero, is the one who greeted her and carried her soul up and away, to a place where no pain, hurt or worries exist. No surprise here, she always had to be the first to report to dad. Chris is survived by her husband, Steve Myers of New Lexington, Ohio. Married since 1989, we are still attempting to locate his balls, which have been in her purse, since this date. Steve wouldn’t have had it any other way, as she was the matriarch of the family, and her word was final. All he asked was that she carry a larger purse. She loved her husband with the same passion she loved life. She carried her purse gently, and loved ferociously. Chris is survived by three sons, Steven Jr, Dustin and Creighton; sisters, Tanya (Randy) Miller of New Straitsville and Heather (Toby) Davis of Junction City; two brothers, Bobby Preece and Chad (Crystal) Preece, both of Junction City; mother, Ruth Sharon Preece of Junction City; mother-in- law, Gladys of Amanda; aunt, Eve Tate of Circleville; and several cousins, nieces and nephews. Chris is survived by her Hookah family. The Hookah family is the true definition of, “Blood makes you related, loyalty makes you family.” Chris considered the Hookah family her sisters and brothers, and would refer to them as such. There is such an enormous amount of people in this family; individually naming them would take months. I can assure you, the love and passion she had for each one of these beautiful human beings, was immense in nature and unfaltering. A family gathering will take place Saturday, May 14 from 10 – 12 pm at the Morgan Funeral Home, 124 Fort Street, Bremen. A service to celebrate Chris’ life will follow at 12 PM in the funeral home with Rev. Wendy Noble officiating. Online condolences at www.morganfuneralhomeohio.com

Helen (Chris) Christine Myers, of New Lexington, Ohio left this earth suddenly on May 8, 2016 at the very young age of 44 years. She was visiting her mother at Fairfield Medical Center in Lancaster, Ohio when she walked outside to get some air,... View Obituary & Service Information

The family of Helen (Chris) Christine Myers created this Life Tributes page to make it easy to share your memories.

Send flowers to the Myers family.