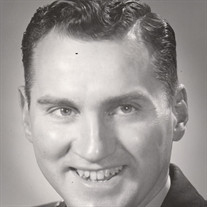 Frank Fatio Gibson III, 94, passed peacefully on October 6, 2018 at the Pickering House, Lancaster, OH. He was born on June 29, 1924 in Newark, New Jersey to Frank Fatio Jr. and Matilda (Shomas) Gibson. While a student at Amherst College he enlisted in the US Army in 1942. He saw active service in Central Europe in WWII. He was honorably discharged in January 1946, receiving several citations, including the Purple Heart and Oak Cluster. Returning to civilian life, he met Florence Rafter while a student at Amherst. They were married on January 26, 1951 in Glen Ridge, NJ. Upon completing his studies, he became a licensed Attorney of Law. After practicing for a time in NYC, he decided to pursue a teaching career. He taught for 10 years at the Manlius Military School while starting his family with Flo and continuing studies at Syracuse University. Eventually he took a position at the State University of NY, Alfred. The year 1966 brought another change as he moved his family to Ohio, becoming a tenured Professor of Business Law at The Ohio State University until his retirement in 1991. His family was always of utmost importance. He is survived by his wife of 67 years, Florence Gibson; children, Frank (Sharon) Gibson, Shirley McClelland, Nancy (David) Auger, Kathy (Don) Maloney and Brian (Erica) Gibson; grandchildren, Addy Madorsky, DJ Auger, Hannah and Ian McClelland, Katelyn and Dillan Maloney, Destiny and Christine Gibson, Frank and Braelyn Gibson and Brandon Robinson; great-grandsons, Marlon and Nathan Madorsky. They all brought him much joy. Frank enjoyed caring for his farm in Alexandria, Ohio. He was an avid runner, competing in 2 marathons and many races into his mid 70’s. He demonstrated by example, great integrity, the importance of physical activity and proper grammar. A time to visit with Frank’s family will be Friday, October 12th from 11 AM to 1 PM at the Morgan Funeral Home, 124 Fort Street, Bremen, Ohio. A celebration of Frank’s life with immediately follow in the funeral home. Contributions may be made in Frank’s memory to the American Heart Association. Online condolences at www.morganfuneralhomeohio.com

The family of Frank Fatio Gibson III created this Life Tributes page to make it easy to share your memories.

Send flowers to the Gibson family.