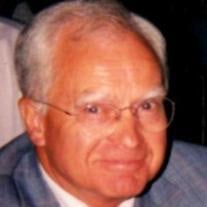 Floyd Lee Barker of Lancaster, Ohio passed away April 8th, 2011 at the age of 78. He is survived by his wife Helen, son Steve, daughter Cindy, brother Bob, and granddaughter Carmen. Floyd was predeceased by his in-laws George and Georgia Shumaker. The son of Floyd and Alice Grove Barker, Floyd was affectionately known as Sonny by his mother and brother, while his dad liked to call him Junior. At a young age, Floyd moved from his birthplace in Lancaster to nearby Bexley, Ohio where he eventually graduated from Bexley High with the class of 1950 and subsequently earned an Accounting BS from The Ohio State University. Always a hard worker, Floyd held down paper routes as a boy for both the Columbus Dispatch and The Journal, and later worked in the family business, Ohio Freight Lines, as a truck driver. A proud member of the Iota chapter of the Chi Phi Fraternity class of 1954, Floyd became a lifetime member and supporter. Floyd also served as an officer for the Rushville Lions and as an Elder of the Rushcreek Presbyterian Church. In lieu of flowers please make your donation payable to the Rushcreek Presbyterian Church care of: Treasurer Cindy Shaffer, 1825 West Rushville Road, Lancaster, Ohio 43130. Floyd was an accountant and controller for Anchor Hocking and tirelessly worked as requested in Houston, Texas; Lancaster, Ohio; San Leandro, California; Salem, New Jersey; Warner Robbins, Georgia; and Lawrenceburg Indiana. Upon retirement, he returned to his Ohio roots and maintained a cattle farm with Helen. Floyd will long be remembered as a gentle and dignified man who always had time for the many people touched by his loving and caring spirit. A funeral service in Floyd's memory will be held at the Rushcreek Presbyterian Church located at 7741 East Main Street, West Rushville, Ohio 43163 on Wednesday, April 13th, 2011 at 11:00AM. The service will be officiated by Reverend Julian Taggart.

Floyd Lee Barker of Lancaster, Ohio passed away April 8th, 2011 at the age of 78. He is survived by his wife Helen, son Steve, daughter Cindy, brother Bob, and granddaughter Carmen. Floyd was predeceased by his in-laws George and Georgia Shumaker. The... View Obituary & Service Information

The family of Floyd Barker created this Life Tributes page to make it easy to share your memories.

Send flowers to the Barker family.