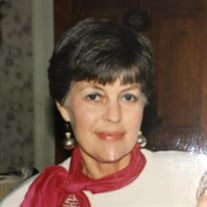 Florence Rafter Gibson (Flo) died peacefully in her sleep May 8, 2021. She had recently celebrated her 92nd birthday on April 27. She is survived by her children Frank (Sharon) Gibson, Shirley McClelland, Nancy Auger, Kathy (Don) Maloney, Brian Gibson. Grand children Addy (Danny) Madorsky, Ian (Amanda) McClelland, Hannah (Kurt) McClelland, DJ Auger, Katelyn Maloney, Dillan Maloney, Frankie Gibson and Braelyn Gibson as well as five great grandchildren. Flo was married for 67 years to Frank Gibson who died in 2018. They lived in New Jersey, upstate New York, and Ohio while raising their family of six children. They eventually settled on their farm in Alexandria, Ohio and lived there for almost 50 years. Springhill Farm became a focus for Flo’s considerable energy planting beds of asparagus, blueberries, grapes, vegetables and countless flower gardens. Her labor and love are still apparent today. Flo loved animals. She raised and rode horses, riding on the trails, competing in endurance riding, and being a member of the Rocky Fork Headley Hunt. Over the years, she had many devoted dogs including the family lab and later several rescue dogs. She participated with one of her rescue dogs in “Angel Paws” organization. Flo’s dynamic nature was shown in her professional life. She married with a degree from Bradford College, and eventually earned her Masters in Social Work from The Ohio State University. After working briefly at Orient Institute, she became the Executive Director of Family Services and Counseling of Newark in 1972. Flo was passionate about many things and women’s advancement was among them. She helped with programs in credit counseling and a young mothers’ group. Flo was instrumental in starting the shelter “New Beginnings” for victims of domestic abuse in 1983. Upon her retirement in 1994, she threw her energy back into gardening full time, studying to become a Master Gardener, and could be found from early morning to dusk in her various flowerbeds, vegetable gardens, or working in the woods. An iconic fundraiser for Action Ohio was known as Flo’s Garden Party. She volunteered her gardens, and her time to support them for eighteen years. Her gardens have also been featured in several national and local “open” garden days. Flo is preceded in death by her loving husband Frank F. Gibson III (2018), her daughter Linda (1978) and her son-in-law David Auger (2019). Flo was a passionate supporter of women’s rights, environmental protection, and saving farmlands. Donations to such causes in her name would be a meaningful tribute to her life. Flo’s energy and enthusiasm for living will be remembered in a Memorial Service on June 26 at her beloved Springhill farm. Daughters Kathy Maloney (740-536-9003) or Shirley McClelland ([email protected]) can be contacted for further inform

The family of Florence Rafter Gibson created this Life Tributes page to make it easy to share your memories.

Florence Rafter Gibson (Flo) died peacefully in her sleep May...

Send flowers to the Gibson family.