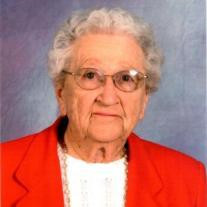 Cuzune (Shirley) Shaw, lifelong resident of the Rushville community, passed away February 3, 2011 at the age of 97. She was born December 14, 1913 in Eccles, West Virginia the daughter of the late John and Anna Getchen. Cuzune was an active member of the Rushcreek Presbyterian Church and had served as a deacon. She worked in the local post office for 16 years and was a past matron of White Shield Chapter, O.E.S. As a lifelong collector of antique buttons, she was the last charter member of the Zane Trace Button Club, organized in 1960 in Zanesville, Ohio. She was an active life member of the Buckeye State Button Society and also a life member of the National Button Society. During the many years, she and her sister, Stella, mastered the art of reproducing antique picture buttons and making original ones in jasperware. She was an avid gardener and loved fishing as a past-time. She is survived by her son, John (Sue) Shaw; sister, Stella Rzanski of West Rushville, Ohio; daughter-in-law, Pennie B. Shaw of Orangeburg, South Carolina; four grandchildren, who have made her very proud, James (Shannon) Shaw of Irvine, California, Patricia (late Joel) Byars of Greenville, South Carolina, Deborah (Kenneth) Hoffmann of Vandalia, Ohio and Sandra (Clarence) McCoy of Lancaster, Ohio; great-grandchildren-the joy of her life-whom she had the privilege of living to see the first-born enter college are Zachary, Emily and Joseph Hoffmann of Vandalia, Ohio, Timothy and Joseph Shaw of Irvine, California; one very special niece and her very best friend and fishing buddy, Joanne Kish of Midway, West Virginia; and other nieces and nephews. She was preceded in death by her husband, Leland M. Shaw; son, Robert G. Shaw; sister, Annie Kish; brothers, John, Charles and infant, Anthony Getchen; brothers-in-law, Aldelbert Rzanski and Joseph Kish. Visitation will take place Sunday from 2 – 5 PM at the Morgan Funeral Home, 124 Fort Street, Bremen, Ohio. Funeral services will be held Monday at 11 AM with one hour prior visitation at the funeral home with Rev. Richard Riedel officiating. Interment will follow at West Rushville Cemetery. In lieu of flowers contributions may be made in Cuzune’s memory to the Rushcreek Presbyterian Church, 7741 East Main Street, West Rushville, Ohio 43150 or to the charity of one’s choice.

Cuzune (Shirley) Shaw, lifelong resident of the Rushville community, passed away February 3, 2011 at the age of 97. She was born December 14, 1913 in Eccles, West Virginia the daughter of the late John and Anna Getchen. Cuzune was an active... View Obituary & Service Information

The family of Cuzune Shirley Shaw created this Life Tributes page to make it easy to share your memories.

Send flowers to the Shaw family.