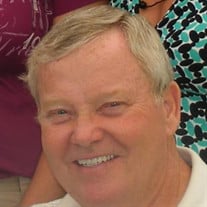 B. Jack Williams, 79, our beloved Dad, didn’t quite make it until spring like he wanted, but rather laid down his variety of lawn and gravel rakes here on earth and picked up his crown in heaven on Sunday, March 13, 2022. He was born January 17, 1943 in Portsmouth, Ohio to Bradie and Betty Jewel (Crossen) Williams. Jack’s life mattered! He was always impacting and influencing others until he breathed his last breath. His biggest strengths were manifest throughout his life in being an understanding, compassionate funeral director, serving families during the most difficult time of their lives’ for 30 plus years, in leading Work and Witness teams building churches in third world countries or in giving tirelessly and selflessly to his family; he oozed compassion. He had been a member of Springfield First Church of the Nazarene where he served on the church board or wherever he was needed. Jack was the previous owner of Williams Funeral Home, Cedarville, Ingling Williams Funeral Home, South Charleston and Jackson, Lytle & Ingling Williams Funeral Homes, Springfield and Yellow Springs. After the loss of his beloved wife, Ruth, in 1998 - his companion, friend and business partner - Jack retired and moved to his favorite fishing hole, Norris Lake, Tennessee. His family and friends have so many cherished memories of time spent with Jack in and around Norris Lake. Much to Jack’s disappointment (but not his families’), his health forced him back north to Ohio in 2017, where he spent the last several years living next door to his daughter Sherri’s home in Bremen. He found his enjoyment in family being closer and had a special twinkle in his eyes and a smile when his great-grandkids wanted a ride with him on his hover-round or came calling to his home to ask for a popsicle or M&M’s – they were never denied. He spent countless hours keeping busy with his lawn tools and buckets, pulling weeds anywhere he saw one, especially the funeral home parking lots, raking dirt, leaves, pine needles, pinecones and gravel. His neighbors got to know him and kept an eye on him for his safety as he went all over on his “ride”. He fought a great fight and had a never-give-up attitude even when he felt like things seemed pointless as he came to the end of his journey. He finished his race, though slower than he liked, over these past few years. He kept the faith – longing to see his beloved wife, parents and so many family members that went home before him. He transitioned to life in heaven so peacefully and we have such great peace in knowing he made it to the prize. Jack is survived by his daughters, Sherri (Mark) Morgan, Bremen, Renee (Greg) Burton, South Charleston and Tara (Tim) Carnes, Springfield; grandkids, Sarah (Kyle) Compton, Katie (Troy) Matz, Erica Morgan, Mitchell (Sarah) Burton, Brittany (Tyrone) Blaize, Michael, Hannah, Haley, Hayden and Lacey Carnes; 10 great-grandkids; his constant canine companion, Zeke; niece, Mandy and her family; sisters-in-law, Ruth Dixon, Thelma Williams, Hazel and Mary Dixon, Linda (Tom) Midkiff and Marilyn Williams; many nieces, nephews and cousins; and friend of over 50 years, Elaine Strickland Young. He was preceded in death by his parents; his wife, Ruth (Dixon) Williams on June 4, 1998; brother, Bradie Lee Williams; father and mother-in-law, Clyde (Gracie) Dixon, brothers-in-law, Melvin Dixon and R W Williams; and uncles, whom he dearly loved, Jack (Jennie), John (Marie), Bertel (Jean) and Victor (Dorothy) Williams. A time to visit with Jack’s family will be Thursday, March 17th from 5 – 8 PM at Morgan Funeral Home, 124 Fort St., Bremen, OH An additional visitation will be Friday from 4 – 7 PM at First Church of the Nazarene, 901 East Home Road, Springfield, OH. Funeral services will be held in the church Saturday at 10:30 AM with The Rev. Dr. Joseph L. Boysel officiating. Graveside services will follow at North Cemetery, Cedarville, OH. Online condolences at www.morganfuneralhomeohio.com

B. Jack Williams, 79, our beloved Dad, didn&#8217;t quite make it until spring like he wanted, but rather laid down his variety of lawn and gravel rakes here on earth and picked up his crown in heaven on Sunday, March 13, 2022. He was born... View Obituary & Service Information

The family of B. Jack Williams created this Life Tributes page to make it easy to share your memories.

Send flowers to the Williams family.